The debate around Tesla (NASDAQ:TSLA) is always controversial. On the way up, the critics complain about the state of its fundamentals. On the way down, the bulls are screaming because it’s not a car company. In reality, TSLA stock transformed last year and neither side has realized it yet. The company made tremendous progress, so the stock is no longer speculative but one with solid fundamentals. Therefore, the top level plan of action is to buy the dips when they come. Where to do so depends on the investor’s time frames and horizon.

For the short-term, there is immediate support just below current price. Bulls successfully defended the $575 zone with more support below. I expect buyers to step in if this malaise continues, but this is for the short-term traders.

The long-term investors should exercise patience mostly because of extrinsic factors. The whole equity market is at nosebleed levels. Although that alone is not reason enough to short, it is prudent to exercise caution. Even our top stock picks have to work within the entire market prism. If the indices correct, they will drag down all stocks, including the ones with solid fundamentals. 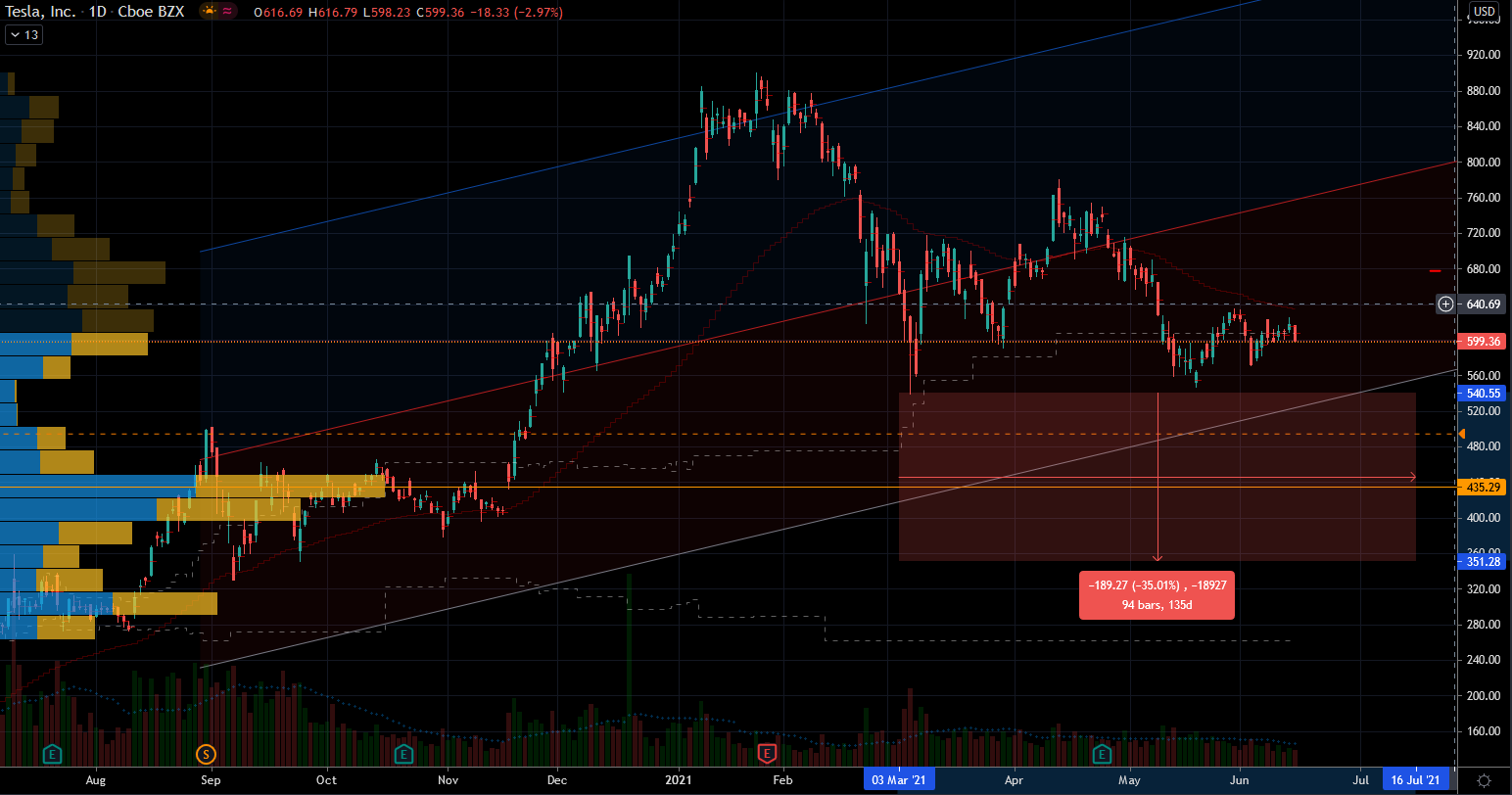 If I’m long TSLA, I can stay in it until it hits my bull or bear targets. Meanwhile, those who know how to use options should look into selling covered calls. This allows them to put the shares they own to work and create synthetic dividends. The other opportunity that comes from options is to sell puts on bad days.

For example, yesterday when Tesla fell 3%, I could have sold the August $400 put and collected $5 for it. This trade does not need a rally to win. In fact, TSLA stock can fall another 35% and I can still make a profit.

Since I only sell puts to own shares, the worst case scenario is almost ideal. If if falls below $400, I could own shares at a huge discount and keep my premium. I wrote about a similar strategy in February and it worked like a charm. Buying the dip from the March market correction worked.

There is a very bearish scenario that could happen, especially if markets correct. The stock is still up 800% from the pandemic lows. If it loses $530 support it could trigger a big bearish pattern with -35% potential from there. There is also resistance going into $680 per share.

Outside Factors to Consider

The modern investor should expand their bag of tricks. We are clearly seeing a big shift on Wall Street. Just look at what is happening with the social media investment groups. The Reddit folks have hijacked traditional investing mantras. The draw of the quick buck is just too big. There will be retribution one day because they haven’t been through a massive correction yet.

Those who bet big usually lose big. We currently have $5  trillion to $7 trillion (I honestly lost count) of stimulus going through the economy. When that runs out, it will leave a giant void of bids for stocks without warning. This alone is not a reason to short the indices because we don’t know how long this charade will last. The Federal Reserve could hint to us on timing today. So far, they’ve been sheepish and not wanting to ruffle any feathers on Wall street.

Tesla stock fundamentals are solid. Critics complain about how fake they are because of special circumstances. To that I say it doesn’t matter how they make their money as long as they’re doing it legally. They were on the verge of collapse not too long ago and now they generate $6 billion of cash from operations. They no longer need to borrow to exist, so they can fuel their own future. This frees Elon Musk on the strategic level.

TSLA stock bears fail to grasp these nuances. This is not the same company they were shorting two years ago. Besides, a quarter of the shares are in the hands of somebody who doesn’t sell. Shorting the stock is like playing a tennis match with a ping pong racket. The easiest way to trade Tesla is to buy the dip and the bigger it is, the better the opportunity.

On the date of publication, Nicolas Chahine did not have (either directly or indirectly) any positions in the securities mentioned in this article. The opinions expressed in this article are those of the writer, subject to the InvestorPlace.com Publishing Guidelines.

Nicolas Chahine is the managing director of SellSpreads.com.