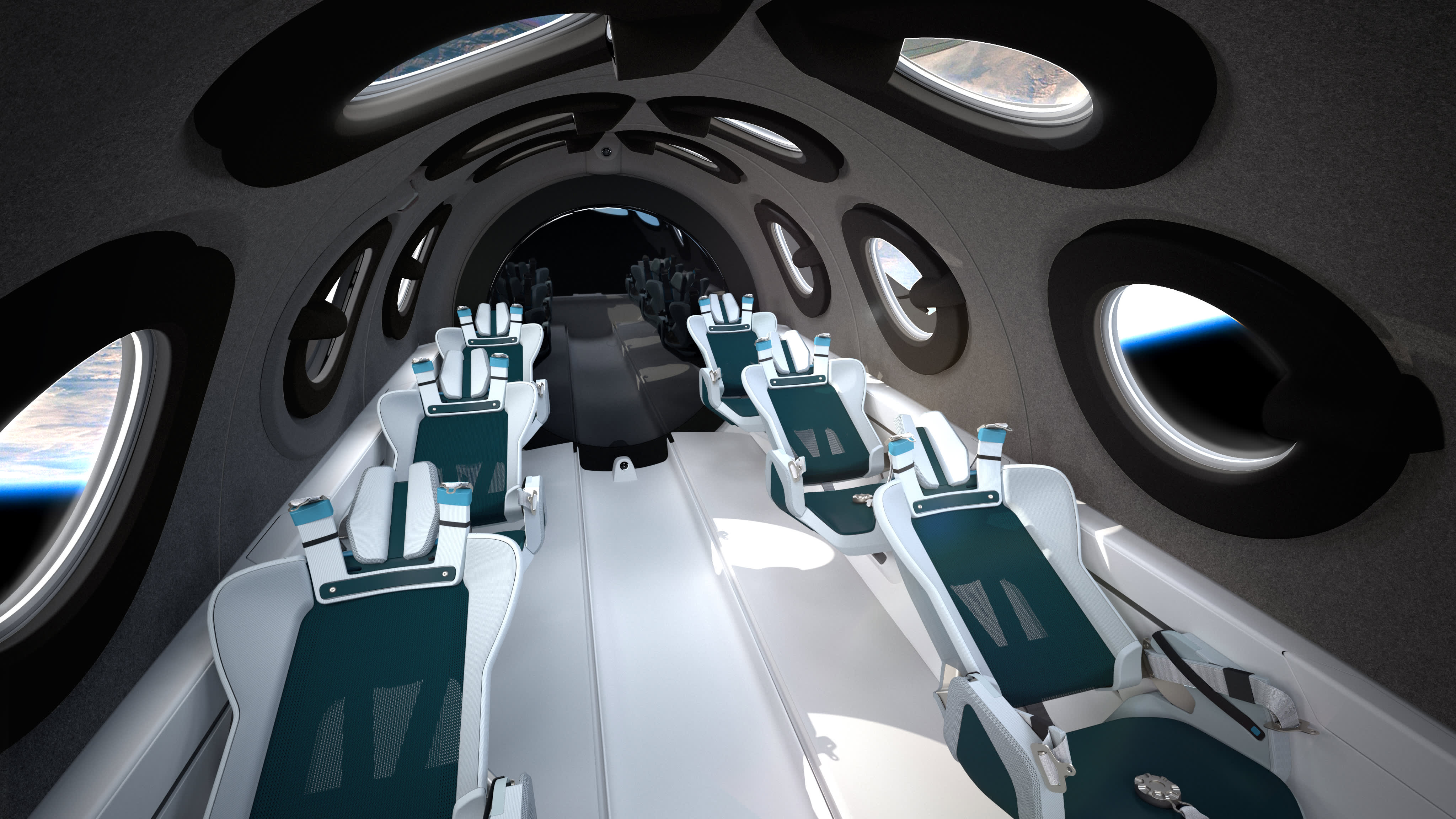 Virgin Galactic is giving its customers a first look inside the cabin that will carry them to the edge of space and back, as the space tourism company gets closer to finishing development of its spacecraft.

The cabin’s design is the central piece of the company’s product, especially due to the variety of stages during a Virgin Galactic spaceflight. In all, a trip will last about 90 minutes from takeoff to landing. But that will include taking off from a runway under the power of a jet-powered carrier aircraft, a brief free-fall after the spacecraft is released from under the aircraft at about 50,000 feet altitude, a rocket-powered burst of acceleration skyward hitting more than three times the speed of sound and then a few minutes floating weightless in micro-gravity at the edge of space.

The company’s spacecraft is designed to hold up to six passengers, in addition to the two pilots. Those tickets don’t come cheap either, as Virgin Galactic has reservations from over 600 customers, the majority of which were sold for between $200,000 and $250,000 per person. That puts Virgin Galactic’s business squarely in the realm of luxury experiences, meaning every moment counts for those who step inside the spacecraft’s cabin.

With the COVID-19 pandemic preventing the company from revealing the cabin interior in person, Virgin Galactic is sending virtual reality headsets to customers who have reservations for future flights. Additionally, aspiring astronauts can download a new app to view the Virgin Galactic design in augmented reality on a mobile phone through the Apple App Store or Google Play Store.

A virtual rendering of the inside of Virgin Galactic’s spacecraft cabin, with six seats for passengers.

Virgin Galactic partnered with U.K. design agency Seymourpowell to create the cabin’s interior and seats. It features soft surfaces throughout, with many places to grab on around the edges of the windows and even the “floor” of the spacecraft. Each of those grips stick out only a couple of inches from the spacecraft walls, as Brown explained it takes just a finger to push oneself around when weightless in space.

“That allows us to maneuver ourselves safely around the cabin,” Brown said.

The spacecraft features 17 windows in all, with five up front for the pilots and a dozen round portholes in the cabin for the passengers. Each window features a halo of multi-color LED lights hidden around it, with specific mood lighting for the different stages of the trip.

“It’s sleek, as we didn’t really want to have it be too garish on the inside. Because, honestly, the whole point of this is to look outside of the cabin,” Virgin Galactic Chief Space Officer George Whitesides told CNBC.

The cabin has 16 cameras, which will film the passengers in high definition and capture their spaceflight. Additionally, a large mirror — made of a lightweight plastic composite — covers the back of the spacecraft, a feature that Whitesides says helps to “expand the cabin” for the passengers. It’s an idea the company has saved for several years, Whitesides explained.

“We thought it would be really cool … [and] it’s almost as wide as the Hubble Space Telescope mirror,” Whitesides said.

A close up look at the seat’s materials.

Virgin Galactic emphasized that the seats can be customized to each individual, thanks to its form-fitting design. The seats are made of aluminium and carbon fiber, as well as foam and a knit fabric made by Under Armour — which also makes the spacesuits the customers will wear.

The seats are each attached horizontally to the spacecraft’s fuselage, a design element known as cantilevering. Additionally, the pilots control a reclining mechanism for the seats, which will help passengers better manage the G-forces during the launch and re-entry phases of the spaceflight.

The spacecraft’s seats reclined during flight.

Each seat has a five-point harness, so passengers are tightly secured during flight. The buckles are each designed to be readily available, so customers can easily return to their seats after floating in space.

“We needed to ensure that the straps are just exactly where you need them and you’re not wasting any time looking for these kind of harnesses, so that everything is intuitive,” Brown said.

The passengers will each have a push-to-talk communications system, that the company said will essentially look like small earbuds. Additionally, each seat has a small digital screen in front of it, providing flight data to the passengers. While the screens won’t show biometric data, such as one’s heart rate, Virgin Galactic said more features may be added later. For now, the screens will be used to keep the passengers up to date with what’s happening during the flight.

“We will be able to share things like time left to boost, just to kind of manage your expectations of when zero gravity is about to hit you,” Brown said.

Virgin Galactic is currently installing the full cabin in its spacecraft Unity, which is at its operating base at Spaceport America in New Mexico. The company most recently completed a second glide flight test in June, with Whitesides saying that the next flight will be a full rocket-powered test flight with just two pilots once the cabin is installed. That will proceed a flight test with four passengers, to further test out the cabin’s design.

“The data from that first [rocket-powered] flight back will sort of adjust the speed and progress of the flights that follow,” Whitesides said.

The company’s production of two more spacecraft is “plugging along” despite some changes to operations due to the coronavirus crisis. Further updates about Virgin Galactic’s progress will come during its second quarter earnings conference call on Monday, Whitesides added.

Subscribe to CNBC PRO for exclusive insights and analysis, and live business day programming from around the world.