Chances are good the stock market could hit a few bumps as December gets underway, but any pullback should be slight, setting up for a year end Santa rally, strategists say.

The tone around trade talks between the U.S. and China has been positive enough to keep the market moving higher. The Dec. 15 deadline for new tariffs, however, could present some headline risk, though strategists still expect some sort of deal that will head off a major decline.

“It has been encouraging lately. Not only is the president tweeting that a trade accord will occur and his underlings are verbalizing that they’re getting close, but the Chinese themselves are saying they’re making headway,” said Sam Stovall, CFRA chief investment strategist.

Stovall said December historically is the best-performing month of the year for the S&P 500, but it is known to hit a low mid-month. “I think we end up with loud noise at the upper end of a 1% to 5% decline. I don’t see a 10% to 20% decline, and since there’s no recession I don’t see why we would end up with anything worse than that either,” he said.

Stovall said if President Donald Trump tweets something negative about the trade talks as part of the negotiating process, that could have some impact on the market, but it should be temporary as long as talks continue. “The market’s been brushing off these kinds of things for some time,” he said. “People might say that’s just Trump being Trump.”

Lori Calvasina, RBC chief U.S. equity strategist, warns investors that a bigger pullback is potentially brewing, since many of the biggest money managers are more positive on stocks than they’ve been in months, based on positioning in futures.

“This keeps us on guard for a period of significant consolidation near-term, and will be an overhang on 2020 performance if not resolved before year end,” she wrote.

Technical strategists have been encouraged by the market’s performance this week, after the S&P 500 took a rest last week, declining about 1% over a two-day period. On Monday, small caps broke out as the Russell 2000 hit a new 52-week high, fueled by surging biotech stocks.

Robert Sluymer, technical analyst at Fundstrat, said he’s more concerned about a bigger reversal later in the first quarter, and would take any short term hit to stock prices in stride now.

“Anything could happen to trade or some external event that we have no idea about,” said Sluymer. “The call is to stay long through year end, into the middle or later part of the first quarter.”

Sluymer said the charts he watches are sending a strong signal. “The long term data has been bullish all the way through 2019, and nothing suggests that cycle is over,” he said. “And it tends to run roughly three to four years between cycle lows, so we should have more upside into 2020 and 2021.”

Scott Redler, partner with T3Live.com, watches the market’s short-term technical moves, and he has been expecting for the Russell 2000 to break out, a positive sign for the market overall.

“It shows an appetite for risk which is lifting the S&P to all time highs,” he said.

“The market is strong, but nothing is super-duper hot. It’s been a very methodical move. It hasn’t been a chase-like move,” he said. “I don’t see many red flags which is sometimes the red flag in itself. Overall, the market has been trending above the eight- and 21-day moving averages since Oct. 11 … For six weeks, we’ve been in an active, strong trend that gives you no reason to pull back.” 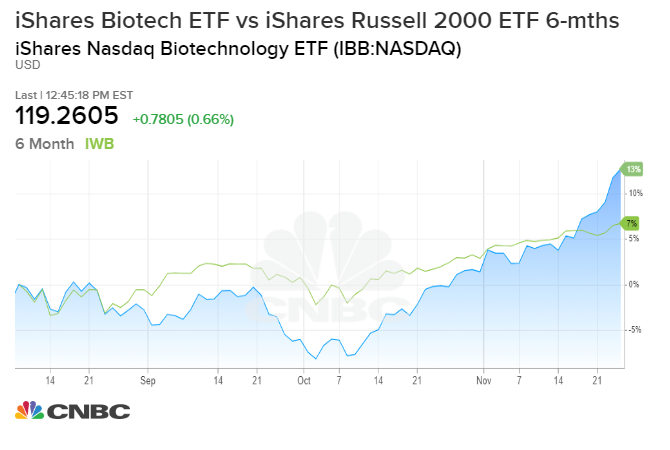 Redler said one area that may pull back is the biotech group. In Wednesday trading, the IBB i Shares Nasdaq Biotech ETF was up more than 3.2% for the week-to-date, on track for its nine straight week of gains, which would be the best winning streak since May, 2013.

“At this point, it looks like the bios got overextended, so it would be a sell rather than a buy,” Redler said. “I feel like I’m picking my spots. I was away from Amazon for two months and I just got back in last Friday … This is the first strong week it’s had in months. At least it’s back in the game.”

Redler said he’s looking for stocks that might bounce with a January effect, which is the impact of year end selling by investors. Investors might not want to sell their winners that have strong gains, and could be looking to take some tax losses.

“If you’re really being surgical, some traders may be looking ahead for the January effect by accumulating the wellness and cannabis stocks that have been battered as a group,” he said.